As you can see in the trailer, the planet is ruled by blue humanoid beings and human beings are their pets. Its touch of animation is artistically beautiful and story is deep, containing lessons for us in the current world, though the movie is old, released in the 70’s. 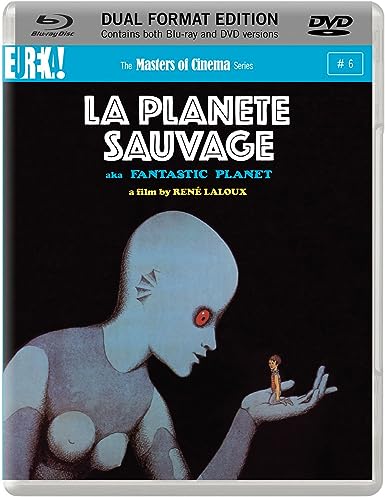 Another interesting fact is that this film influenced Japanese animation director, Hayao Miyazaki for his masterpiece,  ”Nausicaä of the Valley of the Wind”.

Title: Nausicaä of the Valley of the Wind – Official Trailer
URL: https://www.youtube.com/watch?v=6zhLBe319KE

Hayao Miyazaki is the most popular Japanese animation director. For me, I saw a lot of his works since I was a kid as a Japanese. In Fantastic Planet, surely you can find some similarities in its concept, characters and atmospheres with Nausicaa.

If you hope to know full story of Nausicaa, check out Manga version, which English translation is available.
*Movie version contains less than half of the whole story.

Kabuki version of Nausicaa is also available, containing the full story. Personally I like this. It is only in Japanese though.