I watched a war movie named “The Hurt Locker”, directed by Kathryn Bigelow, released in 2008, winning 6 academy awards.
This article briefly shows Film info, plot and my thoughts/review of the movie.

Film information of The Hurt Locker 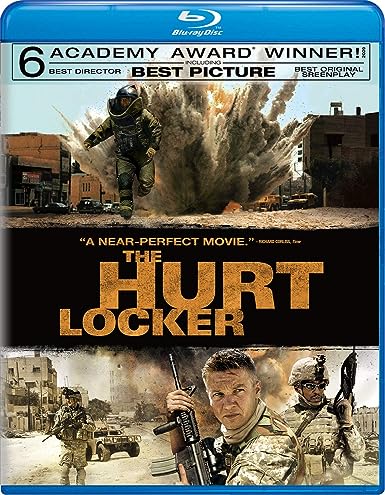 Rough plot of the film

The main character, William James (acted by Jeremy Renner) joins U.S. Army bomb squad team as a new leader in 2004 during Iraq War. His knowledge and experience of canceling bomb is brilliant, but he takes dangerous move by his own judgment, ignoring teamwork even in dangerous missions.
Their tasks are extreme; canceling multiple bombs in a car, suicide bomb, time boms on the street and sudden strikes.
His subordinates, Sanborn (Anthony Mackie) and Eldridge (Brian Geraghty) are upset with William’s attitude and they conflict. Missions get harder day by day, could they survive to finish their duty…?

First of all, I enjoyed ”The Hurt Locker” very much, with its cool visuals and touch of reality on the battlefield. In terms of scenario, there seems to be no story line in this film; Just like recording some missions of bomb squad without feeling towards what is happening there. You can just enjoy watching it, feeling like diving into the battlefield yourself.

Evaluation of The Hurt Locker

This chapter shows my personal evaluation of the film in 2 aspects; One is evaluated as a movie itself, and another as an English learning material.

What’s good about this film is the cool visual of the battlefield. It is definitely exciting experience. Of course it’s worth watching this academy winning movie.

”The Hurt Locker” is not really recommended for those who want to train their English listening ability. There are many ”F” words used in the film and the conversation is in broken English (it could be said to be real natural English though). For me as a Japanese, learning English as a second language, it was difficult to catch up, so I watched the film with Japanese subtitles.

However, ”The Hurt Locker” is highly recommendable especially to those who are interested in War Movies. It is definitely exciting.